A self-centred stock-taking of things literary and academic at the end of 2014.

On the academic side, I published my first peer-reviewed article (“‘I made my great entry–flanked’: Irving Layton’s Collaborators at McClelland & Stewart (1959-1964).” Canadian Poetry: Studies, Documents, Reviews 73 (Fall/Winter 2013): 102-122.). Another has been accepted and is forthcoming in the online journal Amodern sometime in January (“‘setting widespread precedent’: The Canada Council for the Arts and the Funding of Poetry Readings in Canada (1957-1977)).” A third has just gone through revise and resubmit and I sit here waiting on news. My dissertation proposal was accepted (“Make Contact: Contributive Bookselling and the Small Press in Canada after the Second World War”). I made some measurable progress on the first chapter and feel optimistic about writing in 2015. I co-organized UofO’s Department of English Graduate Conference (The Page: Visual and Material Literature) where I presented a paper on Barbara Caruso and her Seripress collaborations with bpNichol. I presented two other conference papers–one on Nelson Ball‘s poetry and book selling at ACCUTE/Congress, and one on William Hoffer‘s book catalogues at The Prestige of Literature (Carleton University). Those two were the first times I have presented work from the future dissertation. I also taught my own course for the first time.

On the literary side, the year started out with a number of short poems being published in the 10th issue of ottawater (the 11th should be along any day now). I participated in Michèle Provost’s Roman Feuilleton show in June, and more recently read at the NAC Fourth Stage as part of the Tonight on our Stage variety show. Both were wonderful (and new) experiences. I went on tour with Jeff Blackman, jesslyn delia smith, Rachael Simpson, and Justin Million, and published a first trade book through Apt. 9 to mark the occasion: Five. Apt. 9 also published amazing chapbooks from Nelson Ball, Beth Follett, Ben Ladouceur, and Dave Currie. Christine McNair’s Apt. 9 chapbook from 2013 also landed on the bpNichol Chapbook Award shortlist. Baseline Press accepted a chapbook of mine for publication in Fall 2015. Chaudiere Books accepted The Collected Poems of William Hawkins, a book I edited gradually over the last four years, for publication in Spring 2015. And just last week, I received my contributor copies of illiterature from Puddles of Sky. I love this little magazine and am thrilled to finish off 2014 with an appearance in it. Poems were slow, but do still arrive.

Thanks for everything 2014. See you on the other side.

Catherine Stevenson recently completed a 14-month project with Nelson Ball to photograph and document Nelson’s home, the one he shared with his wife, artist Barbara Caruso, from 1985-2009. Nelson Ball still lives in the building, a four-story office building in Paris, Ontario that the two converted into a living space, bookstore, and art studio.

Titled “Nelson Ball & Barbara Caruso / Home Project / A Photo Documentary,” the film is beautifully paced, with Nelson’s text (including some poems) interspersed between Catherine’s photographs of each part of the building.

It is an amazing record of a space shared by two wonderful artists, writers, booksellers, and partners. It is well worth your time. Please watch it:

I originally planned to list 14 chapbooks here, but I quickly found it impossible to choose only 14. So here is a pile of chapbooks that represent some more of my 2014 reading. A woefully inadequate list, but some very good and very interesting work in here that deserves your attention. Once again, skewed by my reading time. There is still a stack of chapbooks from 2014 waiting to be opened. Already behind for 2015.

jwcurry’s ROOM 3o2 is up and running again, with delightful minimalist poems in tchts, and curry’s own study of the tagging work of BeRzeRkeR in Ottawa, beautifully illustrated and produced in jwcurry’s inimitable style.

Jennifer Baker. Abject Lessons (above/ground press). Debut chapbook! Smart, funny, thoughtful, steeped in Ontario (literary) history. Jennifer Baker is growing as a poet and you’ll want to have this earliest one on your shelf in another few years time. 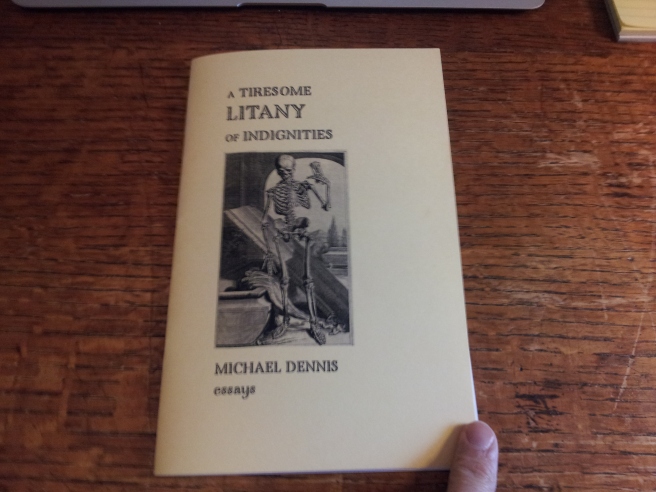 Michael Dennis. A Tiresome Litany of Indignities (Proper Tales). Not poetry, but wonderful essays by a poet. Michael Dennis has always been a great story teller in his poems, and the essay form allows him to really stretch out.

A few of phafours’ always engaging mini chapbooks, work from Sanita Fejzic, Jessica Smith, Avonlea Fotheringham, and Pearl Pirie. 6pp each. Lyric, visual, narrative, Pearl Pirie uses these mini-chapbooks to find and publish work by a huge range of poets, new and established, in a huge variety of styles. In-step with her widely-varied reading and writing practices, these mini’s are one of the best dimensions of what phafours does.

Pearl Pirie. today’s woods (above/ground press). A hugely entertaining re-telling of Goldilocks and the Three Bears that thinks through the implications of each decision in the story, and what the conditions of their home says about their family dynamic.

Janice Tokar. Arrhythmia (above/ground press). Tokar’s first chapbook (I believe). A meditative lyric sequence in 12 parts. I was glad to encounter Tokar’s work for the first time this year, and look forward to seeing where it goes in the future.

Marilyn Irwin’s minimal work is among the work I am most excited to follow in Ottawa. Her chapbook from In/Words, tiny, is out of character insofar as it is an extended sequence (9 parts), stretching her work in new ways. Beautifully produced by the current In/Words team, credit to Avonlea Fotheringham for the layout Renee Syvestre for the illustrations.

“sex at 31” is a little broadside Irwin printed on a typewriter and stitched to some nice, heavy paper through her own new shreekingvioletpress in an edition of 4 copies. I missed the reading this was produced, and am still confused as to how there was a copy left for me to purchase after the fact. You missed out, everyone else. 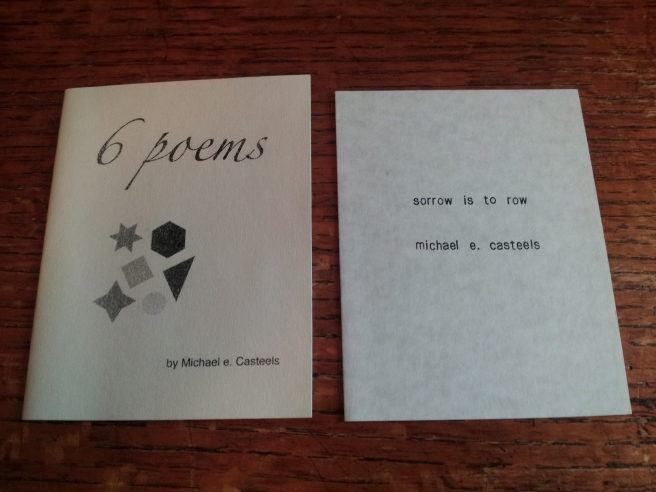 I’m a big fan of the publishing work Michael Casteels does with his Puddles of Sky Press out of Kingston. Consistently engaging, and thoughtfully produced, I’m very glad that he is operating in our small press world. Gorman’s aftermaths is a funny and sad book of concrete poems built as math equations. sorrow is to row is a small typewriter experiment done after bpNichol. 6 poems is more of Casteels own concrete, typewriter experiments, printed as a single-page foldout bound into a cover. illiterature issue iii is actually from 2013, but man is it good. A dream list of minimalists. I’m incredibly jealous. illiterature seems to come out once a year or so, and I always look forward to it. 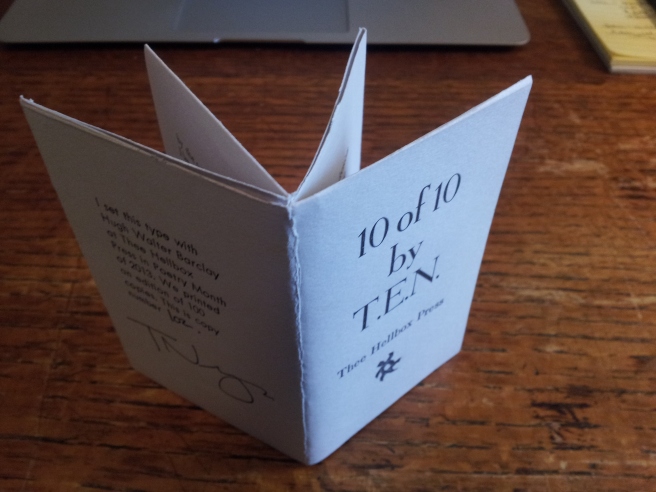 Tanya Elizabeth Neumeyer. 10 of 10 by T.E.N (Thee Hellbox Press). I don’t know Neumeyer’s work outside of this small book. I picked it up at Meet the Presses in November. It is actually from 2013. The chapbook is ten haiku printed letterpress onto a single sheet and folded into the little book you see above (not dissimilar to the mini chapbooks from phafours). Wonderful stuff. If I had more money, I would buy everything coming out of Thee Hellbox. 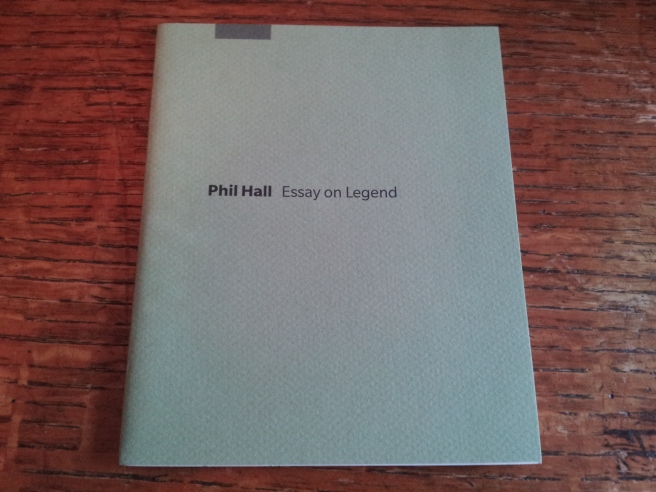 Phil Hall. Essay on Legend (Beautiful Outlaw). The first chapbook I’ve gotten from Mark Goldstein’s elusive Beautiful Outlaw. Tastefully designed and printed (surprising no one who has seen Goldstein’s design work elsewhere), Hall continues to explore the essay-poem as a fruitful form for his poetics. Written in commemoration of the Second Annual Purdy Picnic at the A-Frame, this one is a good companion to his “An Oak Hunch: Essay on Purdy” in An Oak Hunch. Revisiting and rethinking.

Justin Million and Jeff Blackman. Only White Men Shake Hands on the Dance Floor: Selected Poems from They Don’t All Need to be Winners Press.

After collaborating on two chapbooks in the last year or two, Million and Blackman got together to write a third based on the first two. Unable to agree, they each wrote their own version. These were produced for the recent tour we went on (you don’t need to hear me say more about the tour, I’m sure), but the contrasts between what each chose to preserve are interesting and revealing. They read from the books simultaneously in Toronto (over top of one another into one microphone), highlighting the differences, and it was fantastic. More of this, guys!

jesslyn delia smith also produced a chapbook for the tour, but after the remaining copies were lost in Toronto, I failed to get my hands on one. jesslyn, if you make more, or have an extra lying around, I call dibs!

Apt. 9 Press had a good year, and I’m going to include the four chapbooks I published in this list. Maybe that’s bad form? Regardless, I think these are wonderful books and I’m glad they’re in the world.

Ben Ladouceur. Poem About The Train.

A very informal round-up of some of my reading in 2014, to be posted in a number of parts.

First up, 14 trade books of poetry from 2014 that held my attention, skewed by how much (re: how little) time I had to read. So, a number of books that would likely be here aren’t simply because I haven’t had the time to give them proper attention yet. 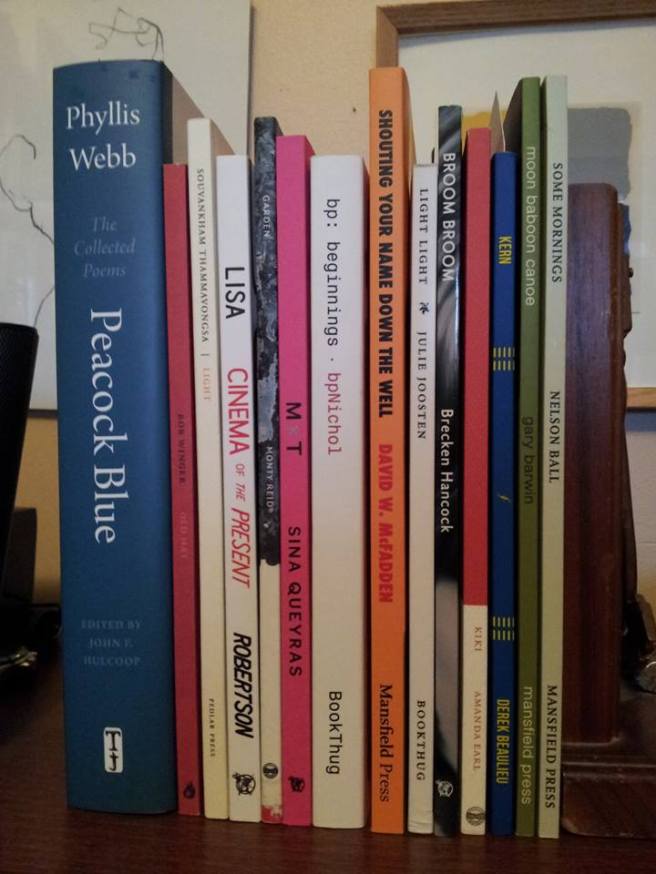