This post collects bibliographic information and photographs of covers for a number of anthologies that, in one way or another, can be classed as Ottawa anthologies of poetry and fiction. Choices were necessary of course. I have not included literary journals (with a single exception), nor have I included chapbook anthologies. These are excellent and valid forms of publication, but I chose to focus on trade anthologies here. Some explicitly include only Ottawa-based writers. Some attempt to represent Ottawa-based reading series and publishers. Some have an Ottawa-based editor and a significant number of Ottawa writers in their tables of contents (or a particularly Ottawa-oriented focus).

This is the beginning of a collection that I would like to grow. For example, I’ve got nothing before 1973 on this list. Is the Malcolm Ross-edited Poets of the Confederation reaching a bit? What have I forgotten? What do I not have on my shelves? What do I not know about yet? 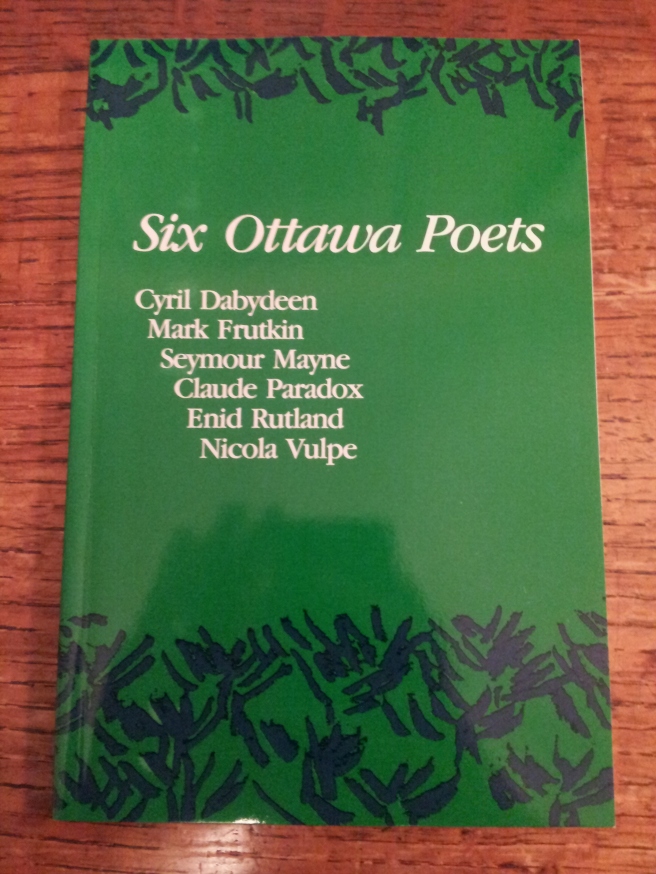 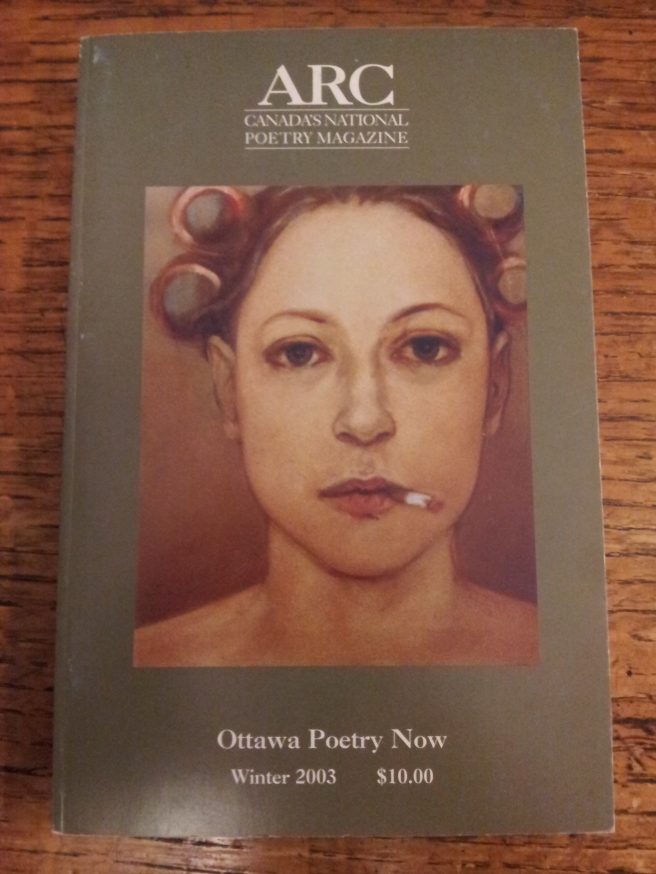 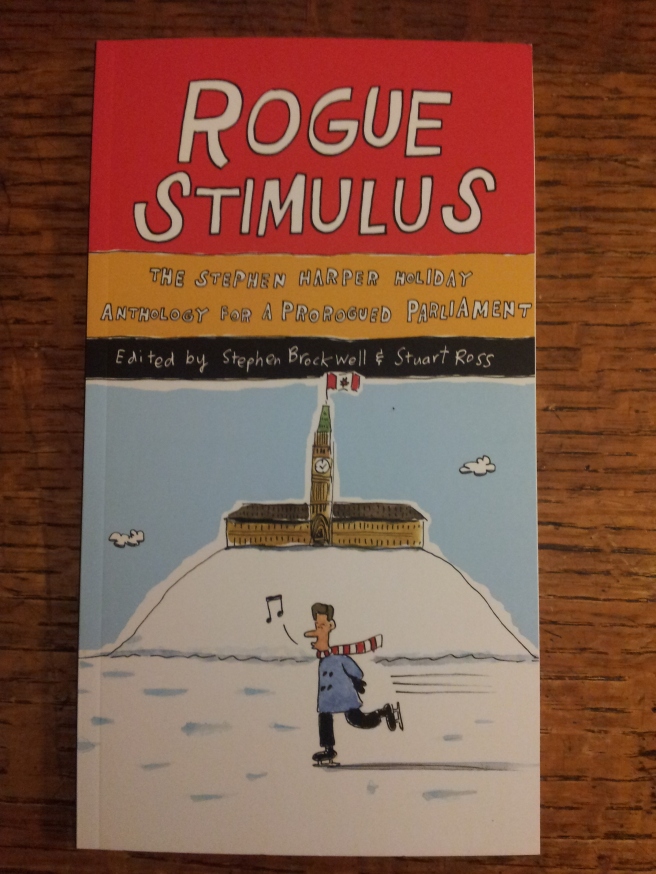 I received a package in the mail from poet, bookseller, and publisher of Laurel Reed Books Kemeny Babineau yesterday. It contained a new publication of his, A Poem of Days, “a cycle of journal entries” written between January 7 2013 and January 15 2014. It is a lovely production, with a handstamped cover in the jwcurry-vein and the typical Laurel Reed habit of stapling loose pages on the top of the book.

The book is a series of short poems, dedicated to “Nelson and you” (Nelson Ball, presumably, a close friend, mentor, and almost-neighbour of Babineau’s), that ruminate on changing seasons, language, poetry, the landscape of farmland surrounding Babineau’s home in Mt. Pleasant ON, gardening, time, and other pieces of daily minutiae.

Late in the book, one finds the following poem:

the social value in this

A Poem of Days follows Babineau’s tendency to produce small editions of his own work, seemingly when the mood strikes, and distributing that work to peers in the small press world. This poem struck me immediately. It articulates the insecurity faced by all artists at some point (at many points, really) in a writing life (or whatever chosen medium). It also reflects the specifics of Babineau’s small press practice, the act of making something “quietly public” by printing a small edition (A Poem of Days is numbered /33), and distributing it in the great gift-economy tradition of the small press to those who you think will take the time to read it closely and carefully and engage with it. 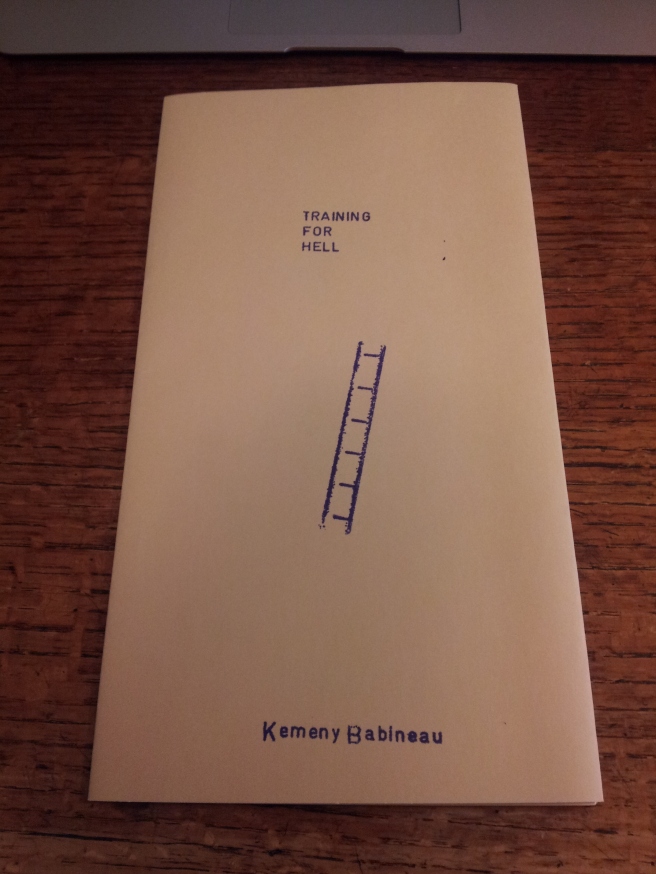 It prompted me to pull my other Kemeny Babineau items off the shelf, a small number of chapbooks, the majority published by Laurel Reed, as well as one from above/ground and a trade collection from BookThug. Reading through them, it occurred to me that the only one that I paid for was as part of my subscription to above/ground press (subscribe!). The rest, Kemeny simply sent to me. I have sent him some of my work over the years, as well as the work of others I published through Apt. 9 Press, and have similarly received back books by others that he published through Laurel Reed. I have met Kemeny at book fairs, and visited his beautiful, book-and-art-filled home once with Nelson Ball.

Sitting with my small stack of his work, I’m left feeling that I have never adequately expressed to him my admiration for his writing, his publishing, and his book selling labour (another matter altogether beyond the scope of this right now; but go buy some of his books! He has great small press stuff!). He was supportive and encouraging when I was starting out, and treats me today as a peer. His writing is loose and experimental, ranging across lyrics, narratives, concrete, constraint-based work, erasure, and on and on. 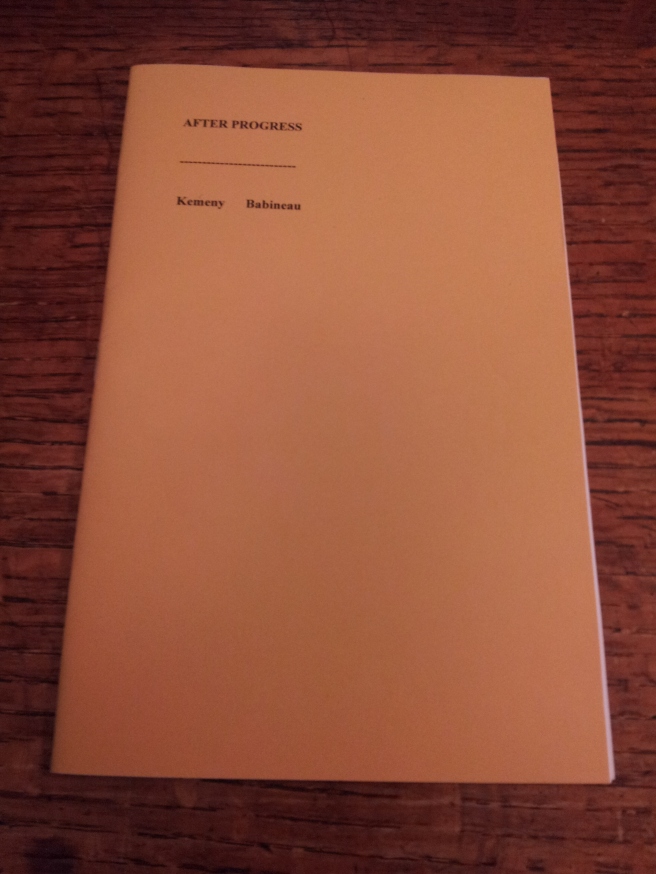 Training for Hell (Laurel Reed Books, 2012) is in the tradition of poets documenting train journeys, in this case as an outlet for the frustration of the poet listening to the people around him, driving him to despair. His trade collection, After the 6ix O’Clock News (BookThug, 2009), demonstrates the range of his work describes above, including concrete poems, deeply-affecting lyrics, the erasure project “VDB Wordlist,” and plenty of other things. Shortcuts (Laurel Reed, 2010) is a set of minimal poems that delight in individual words and sounds. After Progress (above/ground press, 2012) includes this lovely poem for Barbara Caruso:

He publishes the occasional little magazine The New Chief Tongue that is as varied and exciting as his own work (recent issues published David Groulx, Nelson Ball, Gregory Betts, Derek Beaulieu, John Barlow, Louise Bak, bill bissett and others).

The authors he publishes through Laurel Reed are similarly wide-ranging. Daniel f. Bradley’s Chortling American Show Goo is a book of flarf poems. He published work that will be included in two of the upcoming Fall trade titles from Chaudiere Books, including Amanda Earl’s Kiki (2010), and Monty Reid’s In the Garden (2010). (Speaking of which, have you donated to their indiegogo campaign yet? Go do that!). I have Laurel Reed items from Nelson Ball, George Bowering, Jay MillAr, and others. He also recently published A Christmas Foible by bpNichol. His backlist is deep and is worth a look. The Laurel Reed website that used to be up seems to be down now, which is a shame, but I bet he has a list available if you write to him.

Perhaps I am betraying the personal basis of the small press gift-economy by saying these things publicly. I hope not. Little comes up when you search for Kemeny, and I wanted to leave a small mark. Buy his stuff when you see it, and send him some of your own. Maybe you’ll get a package back with a nice note, and you’ll be keeping the whole ungainly-but-satisfying enterprise going for at least a few more days.

Kemeny, thanks for all the books! I read them, and enjoy them tremendously, and I’ll keep sending you books as I make them.