Registration is now open for the University of Ottawa Department of English’s annual Canadian Literature Symposium. The focus is on Irving Layton this year. I’ve got the privilege of helping to organize the conference with Prof. Robert Stacey this time around, and I’m incredibly excited about the three days of events that we have lined up. We have a keynote address from Brian Trehearne, papers from 17 critics, a documentary film screening from Donald Winkler, a poetry reading (details to follow), and a roundtable with Elspeth Cameron, George Elliott Clarke, and Seymour Mayne. It’s going to be excellent, and best of all registration is completely free for all graduate and undergraduate students. If you know a student interested in Canadian poetry, please share this information with them. We would love a packed house and want as many students in attendance as possible.

On heels of rob mclennan’s profile of In/Words two weeks ago, poet, editor and friend Peter Gibbon has written a short memoir on his time with the magazine as well and published it on his Conduit Canada blog. Pete has a pile of smart and insightful things to say about the mag, and some hilarious memories too. You’ll also find some poems in there from Jeff Blackman, Rachael Simpson, and Pete, as well as the closest thing our In/Words generation has ever had to a family photo courtesy of the Maxfield-Blackman wedding. Go read it!

In other fantastic news, William Hawkins is being inducted into the VerseOttawa Hall of Honour as part of their inaugural round of inductees (along with Greg “Ritallin” Frankson). We love Bill here, and I’ll be reprinting a chapbook of Bill’s work that Apt. 9 published in 2010 to mark the occasion. I’ve also never heard Bill read, so it will be a thrill on March 17 when he is inducted. Be there!

From 2006-2009 (or thereabouts), I was an editor at In/Words Magazine & Chapbook Press at Carleton University. My first published poem was in In/Words (Volume 5, Issue 3, February 2006, on the same page as Ben Ladouceur). I worked editing for the magazine, editing chapbooks, and helping to make a monthly open-mic reading series happen. We produced a huge volume of material (see the picture above of my own primary stash of In/Words and In/Words-related publications). I count myself lucky to have been a part of that community. My identity as a writer and a publisher can be traced to the first editorial meeting I attended in the summer of 2006 at Mike’s Place.

rob mclennan recently sent around a set of questions to quite a few of the editors and writers who were around during my years with the mag, and the collected answers were culled and organized by mclennan in this fantastic piece at Open Book: Ontario. My favourite part is Peter Gibbon describing our little group developing “a vicious loyalty toward each other’s writing.” Rob Winger, an influential poet and teacher for all of us in the In/Words community, chimes in at the end with some unbelievably kind words.

Thank you rob, and thank you to the consistently wonderful people at Open Book.

In/Words is still running. They have a great editorial team keeping the ship afloat, and Dave Currie has got the monthly reading series in excellent shape (building off of Justin Million’s invaluable work reshaping it). Somehow the mag is into its twelfth year, which is astonishing. If you’re in Ottawa, drop in to the Clocktower on the last Wednesday of the month.

The truly embarrassing photo below is of Amanda Besserer (left), myself (centre), and Peter Gibbon (right) in the quad at Carleton, Fall 2007 (I think?), trying to convince undergrads to pick up free literary magazines and chapbooks. 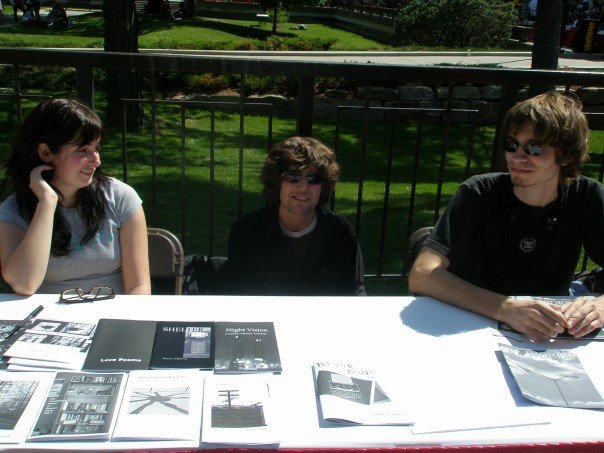